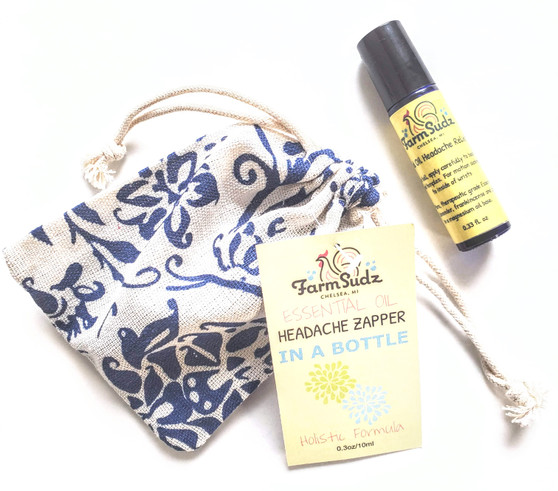 This effective blend is made with a combination of cooling, relaxing essential oils and is also great to put on the wrists to help with motion sickness or nausea. Contains essential oils of peppermint, lavender, frankincense and roman chamomile in a magnesium oil base. Comes in a cute bag with detailed information and instructions.  People report that this blend is very effective on migraines, stress headaches and 'the brown bottle flu.'  ;-)

Read on to find out exactly what the ingredients in FarmSudz' Headache Zapper do.....

The most common type of a headache that afflicts most people are tension headaches. A tension-type headache affects over one-third of men and over one-half of women in the world. The most common way to relieve headache pain is to use over the counter painkillers. Although oral painkillers have their uses, taking too many of them leads to unpleasant side effects.

Chronic use of acetaminophen (such as Tylenol) can cause nausea, rash, liver damage (with high doses). Nonsteroidal anti-inflammatory drugs (such as Advil) can cause stomach upset, heartburn, and stomach ulcers and kidney problems (with long-term use). There are several essential oils known to help relieve tension and alleviate pain. When used together, they offer a natural way to treat headaches.

Researchers have been studying the benefits of peppermint oil for treating headaches for decades now, including a 2015 review published in the Asian Pacific Journal of Tropical Biomedicine which reported that peppermint oil may be effective for eliminating headaches. It may be due to the active ingredient in peppermint oil known as menthol. Nearly half of the oil is made up of menthol, which is known to lessen the intensity of an acute migraine. Research published in Frontiers in Neurology found that using a topical gel with 6 percent menthol on those who were suffering from migraines resulted in decreased pain intensity after two hours.

Peppermint oil has a long-lasting, cooling effect on the skin. It helps to stimulate blood flow in the forehead and also inhibit muscle contractions. It’s also been found to be effective for other symptoms that tension, sinus, cluster headaches and migraines can cause such as nausea, congestion and muscle pain.

Lavender essential oil is well-known for its many therapeutic properties, but it’s perhaps most famous for its ability to relax, relieve stress and tension. It offers sedative, anti-anxiety, and antidepressant properties, among others, that can help ease the pain of a headache, especially when related to anxiety or stress. It’s been found to aid in regulating serotonin levels, which helps to lessen nervous system pain that can lead to a migraine attack.

Multiple studies have confirmed lavender’s beneficial effects in managing migraines, including 2012 research from the Department of Neurology at Iran’s Mashhad University of Medical Sciences. When compared to a placebo, there was a significant difference in the severity of headache symptoms in volunteers who inhaled lavender oil for 15 minutes during a migraine attack, with the majority responding positively, with symptoms either entirely or partially diminished.

Frankincense is one of the most commonly used essential oils, containing over 200 molecular compounds that give it its complex bouquet, as well as a wide range of medicinal properties. It contains a significant amount of soothing compounds called boswellic acids, and many therapeutic properties that are attributed to it being an antiseptic, disinfectant, astringent, carminative, cicatrisant, cytophylactic, digestive, diuretic, expectorant, sedative, tonic, uterine and vulnerary substance among others, that make it particularly good for fighting stress and tension.

The powerful effects of this essential oil for treating headaches specifically is believed to be due to a collection of compounds referred to as monoterpenes. In a research paper titled A Review on Anti-Inflammatory Activity of Monoterpenes, the experts discuss the anti-inflammatory activity of 32 bioactive monoterpenes found in essential oils noting many offer potent anti-inflammatory properties that, similar to conventional painkillers, reduce the swelling of blood vessels that initiate the chain reaction that leads to pain.

Roman chamomile essential oil has been used as a mild sedative to calm nerves and reduce anxiety by promoting relaxation. Inhaling Roman chamomile is one of the best ways to utilize essential oils for anxiety. The fragrance is carried directly to the brain and serves as an emotional trigger. Research shows that Roman chamomile has been used for relief of depressive and anxiety symptoms all over the world, including a number of regions in southern Italy, Sardinia, Morocco and Brazil.

A 2013 study published in Evidence-Based Complementary and Alternative Medicine found that an aromatherapy essential oil blend including lavender, Roman chamomile and neroli reduced anxiety levels in patients in an intensive care unit. The aromatherapy treatment effectively reduced the anxiety levels and improved the sleep quality of patients in ICU compared to conventional nursing intervention.

Magnesium is an important mineral, yet many if not most Americans don’t get enough of this nutrient. Some reports have estimated that as many as 80 percent of American adults are lacking magnesium. As it’s utilized by every organ in the body, without enough magnesium it can result in all sorts of problems, including fatigue, mild nausea, cramps and headaches or migraines. Numerous studies, including 1996 research that found magnesium reduced the frequency of migraine attacks by 41.6 percent, have shown that migraine sufferers typically have a low level of magnesium.

A May 2012 paper from the New York Headache Center concluded that as “magnesium deficiency may be present in up to half of the migraine patients, and that routine blood tests are not indicative of magnesium status, empiric treatment with at least oral magnesium is warranted in all migraine sufferers.” Drs. Mauskop and Varughese outlined multiple ways magnesium interacts with a migraine, noting that a magnesium deficiency may promote cortical spreading depression, cause blood vessels to constrict, affect serotonin (a key component related to a migraine), and influence various neurotransmitters.

A little of the islands right at your fingertips! Mango butter comes from mango seeds (not the fruit…

Bottom's UP! Baby Balm was created just for little ones with all natural ingredients. Made with a sp…

It's called Smoothiez for a reason. It goes on smooth and creamy, but doesn't leave behind any resid…

This sudsy foaming face wash is perfect for dry, sensitive skin. It will leave you feeling refr…

A travel soap case for your FarmSudz Goat Milk Soap or Shampoo & Conditioner Bars!  These c…

NEW AND IMPROVED!  This balm should be in every household. Recommended by our lo…

It's called Smoothiez for a reason. It goes on smooth and creamy, but doesn't leave behind any resid…

Rich and creamy, great for problematic dry hands. Handz is made with shea and cocoa butters combine…

"I only use one moisturizer," my dad said. "It's called shaving cream."Ah, the good old days, when r…

My Fabulous Face Cream was developed by me for my own sensitive (and OK, aging!) skin. Fab Face boas…

Mmmmm! Pucker up! Keep your lips kissably soft all year round with Farm Sudz all natural, hydrating …